END_OF_DOCUMENT_TOKEN_TO_BE_REPLACED

Last 23 March we organized a workshop at the Marineterrein in Amsterdam to discuss the progress of the field lab plans and connect with existing and new contacts. The session was a step towards the planning of a field lab program – hopefully – later this year.

We had a good group of people in the hybrid workshop, both from Amsterdam and Munich (and Berlin). We first updated the attendees with the latest developments. Four agencies of the starting consortium have been developing the first conceptualization for the neighborhood hub we now call Collect|Connect Community Hub. Focus is a ‘commoning buffer’ that plays an active role in the neighborhood community life. From the people for the people.

END_OF_DOCUMENT_TOKEN_TO_BE_REPLACED

Dear readers. The last edition was just released after the war in Ukraine started. The flow of the war is maybe different than expected in some parts, like the resistance and duration. On the other hand, patterns seem the same as earlier wars initiated by Putin, and also compared to the rituals of growing dictatorships. Some are predicting a long-lasting fight for dominance by democratic systems or dictatorial systems. We only can hope that France will not vote for a extremist new president in two weeks…

How does this all relate to the topic of this newsletter? I made the connection when thinking about one of the key elements of the explorations in Cities of Things: the agency balance. We see that part of our own agency is delegated to the intelligent systems, and that there is a shift happening toward technology as a partner above being a tool. A silent partner though, it is not always visible what is defining the help we get. There is a danger in that, linking it back to the balance between centralized and decentralized systems, between democratic and dictatorial systems. Even if we can resist that shift and if the war is not coming to our own country, we can expect more centralized ruled systems, as part of a warlike state of being. And in the end we are integrated in a geopolitical ecosystem that is already balancing value systems.

END_OF_DOCUMENT_TOKEN_TO_BE_REPLACED

As announced in the latter post the field lab Cities of Things Lab010 was invited to organize the hackathon together with Creating010 and Civic Prototyping Lectorate of this year’s IoTRotterdam event. In the end, four teams participated and build some very nice citythings; autonomous moving objects on the streets of our near-future cities. The goal of the citythings was not defined and part of the process of the teams. Great to see it turned out most of the teams made the decision to let the citythings take a social role in the city life.

END_OF_DOCUMENT_TOKEN_TO_BE_REPLACED

At the 10th edition of the IoT Rotterdam event on 8 April 2022, organized by Creating010 of Rotterdam University of Applied Sciences, Cities of Things will be one of the organizers of the hackathon. More than even hacking, prototyping “urban smart-things” as a different name for citythings will be key. And these prototypes will be tested on the streets of Rotterdam by the teams.

In the hackathon teams of participants will rapidly conceptualize and prototype an “urban smart-thing”: a plausible, autonomously operating agent envisioned to roam the public spaces of the near-future Rotterdam. The participants will confront the prototype with the citizens of Rotterdam in the public areas of the city, interview them and jointly reflect on the necessary forms and shapes of the public debate around the role of AI in cities.

The prototype will use a pre-made “wizard-of-oz” platform, allowing a human operator to remotely simulate an AI algorithm, and control the movement of the prototype. Examples of possible prototypes include, but are (by far) not limited to a mobile garbage bin, interactive street signage, or a mobile plant.

See this movie to get an impression:

The teams will work at the new VONK Innovation Center located just off Coolsingel in Timmerhuis. The results of the explorations will be presented end of the day at Het Nieuwe Instituut where the conference program of IoT Rotterdam is located.

Find more information on the website of IoT Rotterdam, and if you read this on time, please join us!

The hackathon is part of the activities of Cities of Thing Lab010 field lab. We keep you posted on the results! 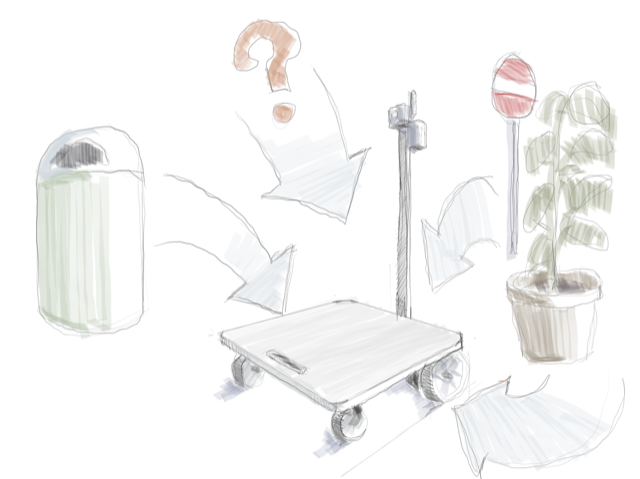 AI is increasingly used in cities to improve their efficiency, as part of urban services and infrastructure, but is also being embedded in various kinds of soon-to-be-autonomously operating agents. Autonomous passenger cars are only one example of such use of AI that will become commonplace within the coming decade. There will also be autonomous garbage collection vehicles, safety, and traffic monitoring agents, advertising and informational bots, delivery vehicles, and many more… As citizens we still rarely think about the impact that such autonomous AI agents will have on our everyday life, beyond the advertised improvement of everyday conveniences, such as the comfort of care-free riding in a self-driving car, or receiving fast online deliveries. Autonomous AI agents will soon, however, impact almost every aspect of our lives, for example

We can’t fully predict what the impact of autonomous AI agents will be on our society and cities, but we can try to collectively envision, understand and democratically shape the applications of this future technology so that it serves our society to the best possible extent. However, as non-expert citizens, we lack first-hand experiences with autonomous agents in the everyday-life setting, which we could use as a point of reference for debate and contestation of AI-related developments.

Spring officially began. A good moment to share some of the activities of Cities of Things in the last months. I write a monthly update and reflection via this email newsletter you can subscribe to.

The two biggest programs at this moment are the field labs in Rotterdam as part of the CityLab010 program, and the field lab as part of Creative Embassy Munich-Amsterdam.

We had the official kick-off with the consortium parties in February and we did start the research activities with a graduation student looking into the design for the Cities of Things design toolkit, and a team of Technical Information students that will work on a prototype of a citything that can be used in the further explorations in the neighborhoods.

We also will organize the hackathon of the IoT Rotterdam program on 8 April with the same prototype as a basis. The first wizard-of-oz version of the prototype was made by Tomasz Jaskiewicz.

As reported here before we signed the Letter of Intent in October in Munich. Four of the Dutch consortium partners started to develop a possible field lab research program: a logistic neighborhood hub that will be designed for the neighborhood. Springtime, Space&Matter, Sophisti, and INFO are working towards the first concept to present to possible partners in both Amsterdam and Munich.

Coming 23 March a hybrid session will be organized at the Marineterrein Amsterdam to meet partners, both from Amsterdam and Munich, to update the program plans and discuss the hub concept. If you like to join, contact Iskander.

16 May we will travel to Munich again to participate in the Munich Creative Business Week with a workshop dedicated to the same goal; connecting the right partners for making the field lab project happen.

Next to these more activities are starting or in the planning.

Dear readers. As everyone is writing stuff on a routine (at least planned to do so), you think about the relevance at a moment that a big crisis is happening so nearby (I am based in the Netherlands); the invasion of Ukraine, that is, of course, Putin’s War. The images of what is happening are so sad and terrible.

I would have probably been writing a reflection on how this example of human-tech interactions is taking an interesting different stand on what autonomous driving is about with an AI taking the role of an attentive passenger and how that can be related to a different form of coaching relation. But I think it would make more sense to reflect on some of the analyses of the developments in the conflict and potential follow-up. There is a link with the themes that drive Cities of Things, I think, on a certain level. I read analysis and listened to a podcast that made me connect some of the aspects to the usual topics of this newsletter: is there a shift in agency of control that we need to be aware of?

There are a lot of assessments on the intentions of Putin’s crew for this war. Is it about re-establishing the Russian Empire or more? Is it economically driven or military defense? Is he getting crazy or sick and fighting for a place in history? It is useful to know the motivations to anticipate; it would be useful too to focus on the context. And instead of being surprised, anticipate the worst.

END_OF_DOCUMENT_TOKEN_TO_BE_REPLACED

The first month of the year is a moment for looking ahead to the year. Predicting is something that does not make too much sense. A year is too nearby to expect big shifts as the real changes can be found looking back for some years. Nevertheless, there is a strong uprise in robotics, and uncertainty about what is real.

There were a lot of critical notes on Web3 last month. It was clear that not all is sunny for the future of decentralizing. Moxie’s article was a kind of accelerator.

Another topic that will remain relevant this year, and I expect to deal with later is living a meta world. Not as a world or company, but as a feeling. Do we have lost connection with the real? It represents a kind of uncertainty for the real. More than specific forms.

But let’s dive a bit into another aspect: the defining role of relations in cities of things.

END_OF_DOCUMENT_TOKEN_TO_BE_REPLACED

Back in 2012 when we kicked off the INFO innovation lab, big data as an important new concept was a rising topic. I reflect on the developments in a whitepaper and promoted an angle where big data served the creation of tiny services, meaning that you should not use the big data as just profiling, generalizing, analyzing tool, but keep it connected to the personal interest of users. I defined three separate layers to support that focus: the objects and the relations between the objects, the people, and the relations between the persons, and binding these together in an intelligent orchestrating layer that generates bespoke services via rules.

END_OF_DOCUMENT_TOKEN_TO_BE_REPLACED

We are very happy that our proposal for setting up Cities of Things Lab010 as part of the CityLab010 project is selected by the commission. Together with partners Rotterdam University of Applied Sciences research group Creating010. Afrikaanderwijk Co-op and Studio voor de Stad we entered the project in the summer. We plan to start the project in early 2022.

From the CityLab010-website (translated from Dutch):

After an exciting time for many Rotterdam initiators, the decision is finally made. 49 Rotterdammers will receive a starting budget from CityLab010. Good for over 3 million euros. With this, they can make their dreams come true.

Aldermen Roos Vermeij (Economy, Neighborhoods and Small Districts) and Arno Bonte (Sustainability, Air Quality and Energy Transition) and chairwoman of the city jury, Carolien Dieleman, congratulate all the initiators on their starting budget and wish them every success with the implementation.

The short description of the City of Things Lab010 project is:
More and more intelligent and autonomous objects are appearing on our streets. This is changing the city at the system level, with impact at the hyperlocal neighborhood level. The Cities of Things Labkar allows neighborhood residents to design and prototype citythings together with designers.

We will create a special page on this website to keep you posted with the progress of the project.

Research through design into a future where we will be living together with intelligent things.

This website is initiated and maintained by Cities of Things Foundation. Read more on About page.